If you’ve never had homemade cinnamon raisin bread let me tell you, you’re seriously missing out.

Well fortunately this recipe for cinnamon raisin bread is so simple and healthy that you have no excuse not to make it.

First of all, it takes twenty minutes max to make (unless you’re like me and sample the batter every two minutes). Second, there’s no yeast involved. Ever made banana bread? This recipe is just as fast and easy to make; like banana bread it’s a quick bread so it uses baking powder instead of yeast. Meaning, you don’t have to wait three hours for it to rise and one slice leaves you much more satisfied than a slice of yeast-risen bread. Third, did I mention this recipe’s probably the healthiest cinnamon raisin bread you’ll ever encounter? Yes, the cinnamon-sugar topping isn’t the most healthy, but considering the rest of the recipe is completely guilt-free, a little sugar’s nothing to run from.

And the best part of all?

This bread leaves your kitchen smelling like the inside of a bakery. And this bakery’s completely guilt-free!

Preheat oven to 350°F. Cream the coconut oil, applesauce, stevia, & honey. Add the egg whites, milk, lemon juice, vanilla extract, and honey. Stir until combined. In a separate bowl combine the flours, baking soda, flax seeds, and 1 tbs cinnamon. Slowly stir the dry mixture into the wet ingredients and mix on low until just combined. Scrape down the edges of the bowl and mix again until combined. Fold in raisins. Combine remaining 1/2 tbs cinnamon and 1/4 c sugar in a small bowl. Pour half the batter into a greased 9″x5″ pan and sprinkle with half the cinnamon-sugar mixture. Pour remaining batter into the pan and cover with the rest of the cinnamon-sugar. Using a knife, cut into the batter both lengthwise and widthwise to swirl the cinnamon-sugar mixture into the batter. Bake for 55 min to 1 hr, or until toothpick comes out clean. Let cool, cut, and enjoy! 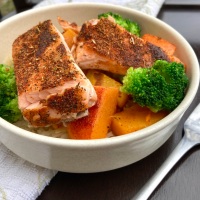