I’ve never had a good blondie before. 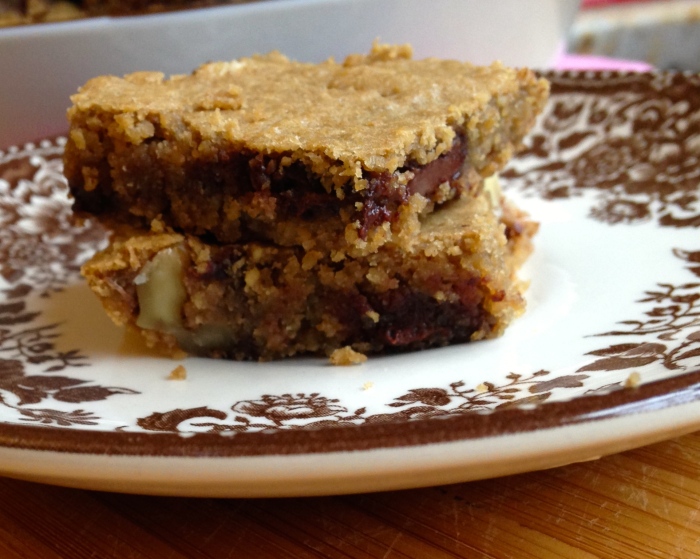 Until today, that is.

A few years ago, when I still consumed high quantities of unhealthy, processed foods on a daily basis, I tried to bake blondies. Now, before that day I had never had a blondie before, and had actually only heard of them in passing. But I saw a recipe for them online and figured I’d give them a go. After all, if they were just vanilla-flavored brownies, how hard could they really be?

It turns out, either the recipe I tried to bake took an extremely high culinary skill level… or I had no talent when it came to baking blondies. Considering the high reviews I’d read regarding the recipe, I’m pretty sure I was just a horrible blondie-baker.

After that mini-fiasco (let me just say, the blondies were tasteless and undercooked), I stayed as far away from brownie’s cousin as possible. Until this past week, when I finally decided to give the dessert another go.

Before I began, I decided to create my own “healthy” version of the classic blondie. So, I researched a bunch of tried-and-true recipes, then compiled a list of the main components of any good blondie. (Apparently the recipe I used years ago had less than half of these classic “components”, if that tells you anything.) Finally, I created my own healthy blondie recipe.

It may have taken a few attempts, but eventually I prevailed in combining all the flavors of a classic blondie in this healthy version. This recipe doesn’t include any of the butter, sugar, or processed white flour used in typical, guilt-inducing recipes. But, get this, these blondies taste just as good, if not even better than guilt-ridden blondies.

And don’t worry, I get several “seasoned” blondie taste-testers to approve this recipe as well. In fact, they were completely dumbfounded when I revealed how heathy this version of the treat actually is.

Blondies may have not been my forté back in the day, but I promise you, after my success with this recipe, I’ll definitely be giving this recipe another go. 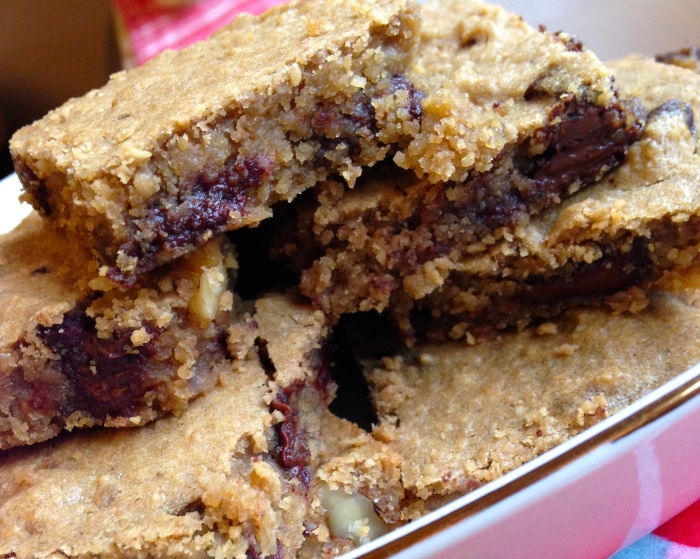 It turns out blondes really do have more fun! Or, at least taste amazing! 😉

Preheat oven to 350°F. In a food processor or blender, process the oats until they’ve reached the consistency of oat flour. In a large bowl, beat molasses and coconut oil until smooth & creamy. Stir in stevia. Add applesauce, vanilla extract, and egg, and stir until combined. Mix in old fashioned oats until fully combined, then add chocolate chips and walnuts, if desired. Grease an 8×8 pan and fill with batter. Bake for 19-21 minutes, until a toothpick inserted into the middle comes out almost completely clean. Let cool, cut, and enjoy!

Nutrition information includes the walnuts. If you don’t include in the recipe, subtract 13 calories, 1 gram of fat, and 1 gram of protein.