My mom went absolutely crazy for this bread.

She’s thoroughly enjoyed my past bread recipes, especially my recipe for healthy Banana Bread, but her love for this bread was different. Almost from the minute she arrived home from work, my mom made a beeline for this bread. Then proceeded to help me devour almost 1/4 of it in one sitting, whist raving about how delicious it was.

I’ve tried to figure out just why she (and I) loved this bread so much. Well, I’ve come up with a few reasons, that are a little more inventive than “it tasted good.”

First, this bread is exceptionally appetizing. I mean, look at it! The cinnamon-sugar layers visible within the soft, puffy twists of the bread; the powdered sugar dusting the top of the bread; the golden-brown color of the crust provided by the egg-wash brushed over the bread prior to baking. It’s more beautiful than I’ve ever looked, let’s be honest folks. 😉 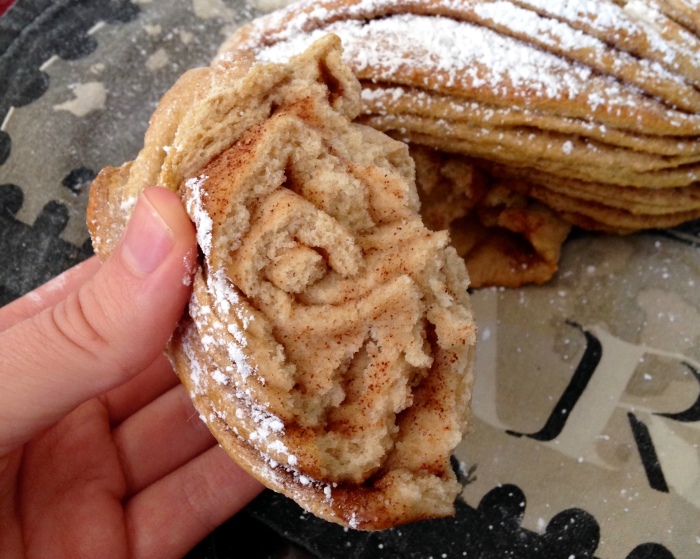 Third, and finally, the bread takes more time and patience to make than any “quick bread” recipe you’ll find online- as this recipe requires the use of yeast. I’ve discovered that the recipes that take more time are almost always prettier than those you can throw together in five minutes. Prime example: this carrot cake vs. this peanut butter chocolate fudge mug cake.

Whatever the reason why this bread quickly became my mom’s favorite recipe really was, there’s no denying it: the bread itself was absolutely divine. The combination of cinnamon and sugar gave the bread a cinnamon-roll like taste, while retaining a fluffy, almost croissant-like texture. Plus, it was soft and buttery… without the use of butter!

Who wouldn’t go crazy for a bread like that? 😉

Add yeast, water, and honey to a measuring cup and stir together briefly. Allow yeast to froth (about 2 minutes). Add sea salt, melted coconut oil, and whole wheat flour to a large bowl and mix together. Pour in yeast mixture. Mix with a dough hook until a soft dough has been formed. Then continue to mix (or knead by hand on a flowered surface) until smooth and elastic (about 5-8 minutes). Lightly grease a bowl and add dough. Cover with a dishtowel and set in a warm place to rise for 2 hours.

Next, punch air out of risen dough and place it on a floured surface. Roll out with a rolling pin into a 1/2 inch sheet. Brush with a little melted coconut oil. Mix cinnamon and sugar together and sprinkle the mixture over the bread. Roll up into a tight roll. Then place on a lightly greased cookie sheet. Cut the dough about 1/2 inch from one end lengthwise to the other end. Turn the cinnamon/sugar layers out and place one of the sections over the other, forming a twist. Continue to twist the bread until you reach the other end. Pinch the ends together. Cover with a dishtowel and let rise in a warm spot for another 30 minutes. Preheat oven to 375°F. Brush bread with beaten egg. Bake for 17-20 minutes, or until golden brown. Let cool slightly. Slice and enjoy!