I can’t believe it’s already the middle of April.

Seriously, where has this year gone? Last thing I remember, I was heading up to Connecticut to see my dad’s side of the family… the week before Christmas.

And now it’s 70° out and Target’s back wall is lined with rows and rows of bikinis… Speaking of bikinis, I think most of us can agree on the source to much of our stress beginning mid-April this year. Bikini season.

I don’t know about you, but I consider myself pretty similar to a bear when it comes to the winter months. Meaning, I load up on food during most of November and December, then try to sleep through much of January and February. And by the time we reach April, I don’t exactly resemble a Victoria’s Secret Model.

Unfortunately, April’s not just the month of impending bikini-requiring weather. It’s also, at least in my case, the month of carrot cakes.

Carrot cake has always reminded me of spring. I don’t know if it’s the fact that it contains carrots, which are typically associated with bunnies, which are in turn associated with spring, or simply that I have carrot cake every April for my birthday. But like clockwork, my daily chocolate cravings are replaced with the hunger (or… need?) for carrot cake.

Since we make a huge carrot cake for my birthday on April 14th (big enough for at least 20 people), this usually results in 3/4 a cake left over that I end up chowing down on (for breakfast… and dessert) until the end of April. If it even lasts that long.

So, by the end of April I think it’s safe to say I’m about as far away from being “bikini ready” as possible.

Well, this year I decided to make a change. Instead of chowing down on the remaining birthday cake, I split it up between various relatives (only taking home about 2 days worth of leftovers… unbelievable, I know!) and satisfied my remaining carrot cake cravings with these Carrot Cake Cupcakes.

These cupcakes are really simple to make, all you really have to do is process the oats into flour then mix everything together & bake. They can also be made into mini or regular sized cupcakes. I personally made the mini because they’re perfect if you need a quick treat to pop in your mouth and satisfy any serious cravings throughout the day. Even better, they’re less than 30 calories a piece (including the icing!)

With these guilt-free cupcakes, I think we’re all one step closer to bikini-season ready!

Preheat oven to 350°F. Process chia seeds in a food processor or blender for about 30 seconds. Add oats and continue to process until the two have combined and reached the consistency of flour. In a large bowl, combine honey, stevia, vanilla extract, and melted coconut oil. Stir in milk, applesauce, and egg. Add flour mixture, cinnamon, and baking soda, and stir until just combined. Stir in chopped matchstick carrots. Mix in warm water until it’s reached the consistency of cupcake batter (slightly watery, but still holding together). Stir in pecans, if desired. Line a cupcake tin with mini cupcake liners and fill 2/3 way full. Bake for 16-18 minutes, or until a toothpick comes out clean. If making larger cupcakes, bake for 22-24 minutes.

For the icing, open a can of coconut milk (do not shake the can before hand). If the milk isn’t thick, place in the fridge overnight, or for at least 8 hours, until it’s reached an extremely thick consistency & has separated. Scoop only the thick consistency of the milk into a large bowl. Remove about 1/4 of it and drop into a smaller bowl. Mix in vanilla and stevia (or powdered sugar, if desired). Whip on high until stiff peaks have formed. Set in the fridge to chill.

Once the cupcakes have cooled, ice with coconut milk frosting. (I also sprinkled with chopped pecans & orange zest.) If not serving immediately, store in the refrigerator so the icing remains fluffy & set. 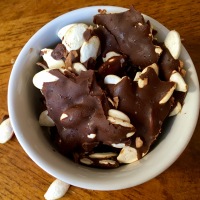